After several hours of compiling - I've got a working OpenELEC (XBMC) image for Raspberry Pi! I've given it a quick test and most things seem to work ok. I followed the build instructions from the OpenELEC site and the builds from the past couple of days seemed to fail for various reasons but yesterday mornings (10954) seemed to build perfectly! For anyone not wanting to bother with compiling and formatting their SD card - I've put this into an image you can write to your SD card with dd or win32imager.

(Update - 21/05/2012) - A few people have commented that the image is too large for some 8Gb SD cards. The card I used to create the image shows up as 16152576 512byte sectors so if your card is smaller than this, you might be out of luck. In this case, use the Binary only download and follow the 'preparing and formatting' instructions below.

Edit: I've added the binaries too for anyone using an SD card which is smaller than 8Gb. If you want to use these, you'll need to prepare your SD card according to the this page, but using the files from the zip instead of the target directory.

OpenELEC for Raspberry Pi - Binaries only 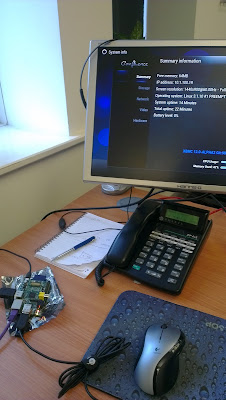